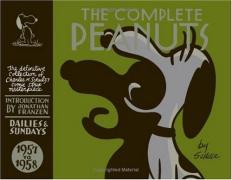 Web links for this book
Search at Bookcrossing.com
Wikipedia booksources

The New York Times best-selling series continues!As the 1950s close down, Peanuts definitively enters its golden age. Linus, who had just learned to speak in the previous volume, becomes downright eloquent and even begins to fend off Lucy's bullying; even so, his security neurosis becomes more pronounced, including a harrowing two-week "Lost Weekend" sequence of blanketlessness. Charlie Brown cascades further down the hill to loserdom, with spectacularly lost kites, humiliating baseball losses (including one where he becomes "the Goat" and is driven from the field in a chorus of BAAAAHs); at least his newly acquired "pencil pal" affords him some comfort. Pig-Pen, Shermy, Violet, and Patty are also around, as is an increasingly Beethoven-fixated Schroeder.But the rising star is undoubtedly Snoopy. He's at the center of the most graphically dynamic and action-packed episodes (the ones in which he attempts to grab Linus's blanket at a dead run). He even tentatively tries to sleep on the crest of his doghouse roof once or twice, with mixed results. And his imitations continue apace, including penguins, anteaters, sea monsters, vultures and (much to her chagrin) Lucy. No wonder the beagle is the cover star of this volume! The volume contains 156 strips that have never been reprinted in any book whatsoever, and another 80 that have only been printed in relatively obscure and out-of-print Peanuts books.And coming up in the next volume… a baby girl named Sally!