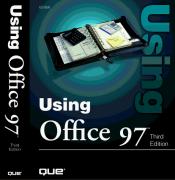 Back to shelf Computer

Reviewer Rob Slade wrote:
Office "suites" of software have lost a level of integration that they had ten or fifteen years ago. The same can be said of books on these suites. Part one is a general introduction to the package as a whole. Chapter one is supposed to get you started, but first spends a few pages giving a not terribly detailed description of the four different Office 97 packages. Moving into invocation of the programs, we are rather uselessly informed that the programs can be found under the Programs item of the Start button menu (with no explanation of what might be included). The Office taskbar is also mentioned without pointing out the cryptic nature of the buttons showing. Some general interface features are catalogued in chapter two. Much of the space on help in chapter three is devoted to promoting the use of the "Assistants" without, however, providing much of an idea of what they actually do. A selection of options for customization is given in chapter four. Part two presents information on the Microsoft Word word processor. The functions included in chapter five are useful in getting started, but the organization makes the assortment appear random. Chapter six reviews basic editing functions. Formatting seems to wring the first admission that a Microsoft product may not be the greatest thing since sliced bread: a warning about AutoFormat ends chapter seven. Templates and styles are covered separately in chapter eight. The discussion of graphic elements in chapter nine concentrates almost exclusively on tables. Chapter ten looks at various print options. Despite the title, most of chapter eleven deals with address list databases. The description of Web publishing in chapter twelve does not provide newcomers with enough analysis to see the pitfalls but, ironically, does step through the process in enough detail that experienced page creators will be able to note problems with the automated functions. Excel is the topic of part three. Most of chapter thirteen deals with entering data in one form or another. Chapter fourteen talks about formulae although more advanced topics wait for nineteen. An equal amount of space is given to formatting, in chapter fifteen. Printing of spreadsheets goes wrong far more frequently than printing text and chapter sixteen points this out, although indirectly. Chapter seventeen covers database functions. Graph and chart production is dealt with in chapter eighteen. Part four looks at PowerPoint. Chapter twenty is an overview of the program as a whole. Suggestions for stylistic and special effects are in chapter twenty one and twenty two. Chapter twenty three deals with automation of presentation. Part five discusses Outlook, specifically Outlook 98, which is also available to non-Office users. Chapter twenty four takes a brief look at installation and a few other functions. Sending, receiving, and dealing with mail comes in chapter twenty five. Non-mail features are covered in twenty six. Part six is a real grab bag. Chapter twenty seven actually concerns annotation and version control, for groupware purposes. Simple data sharing; in cut and paste, linking, embedding, and binders; comes in chapter twenty eight. Chapter twenty nine deals with components and updates. Additionally, two appendices cover macros for Word and Excel. The quality of chapters varies greatly. Some material is generic, and not necessarily directly applicable to the use of Office 97. The keyboard shortcuts list pasted into the front cover, for example, contains such esoteric information as the standard Windows Crtl-X, -C, and -V keystrokes for cut, copy, and paste operations. A few sections are extremely good, and go directly to material that new users need right away. Overall, however, this is a quick and simplistic reference for those who cannot be bothered learning the different programs. copyright Robert M. Slade, 1998