Book details of 'How Computers Work (How It Works Series)' 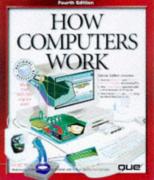 Back to shelf Computer

The Virtual Bookcase Reviews of 'How Computers Work (How It Works Series)':

Reviewer amazon.com wrote:
Have you ever wondered if you should buy a 3-D video card or a computer with a RISC (reduced instruction set computing) processor, only to face the bald fact that you had no idea why it could possibly be worth the $200 to $5,000 you were about to spend? If you have (and who can honestly say that he or she has never bought something just because it sounded "cool"), the fourth edition of this award-winning guide to PCs is sure to demystify the workings of your computer and its peripherals. Focusing on Wintels--particularly Windows 98 machines in this edition--White's style is a perfect balance of the technical and the miraculously simple; yet this is not a book just for beginners. Working your way through each chapter step by step, you're certain to be more knowledgeable about some facets of your desktop machine than even the "expert" who set it up for you. White begins each section of the book with an overview of his subject (e.g., "How the Internet Works" or "Input/Output Devices") followed by a glossary of key concepts. In the subsequent chapters, his short explanations then elucidate those concepts: "As intelligent and swift as a computer's memory may be, RAM has one fatal flaw. It is a will-o'-the wisp. With few exceptions, all memory chips lose the information stored in them once you turn off the computer." The real success of the book, though, is the cut-away illustrations and the CD-ROM animations that take you inside microchips, joysticks, scanners, DVD drives, and even e-mail systems. With the accelerating pace of information technology, one only hopes that Ron White will keep updating his book for the rest of us.

Reviewer Rob Slade wrote:
I was a little surprised at the sequence of topics in the book. I suppose it makes some kind of temporal sense to have the boot process first, but logically there is a lot going on in the boot process that doesn't get explained until later, like how disks, and chips, and other implements of destruction all work together. In any case, the chapters in part one a) only cover the specifics of MS-DOS, rather than the probably more common (by now) Windows 9x systems, b) get bogged down in some very detailed minutiae, and c) if they are going to go to that level of detail, get several things wrong. Part two *does* concentrate on Windows 98, or, at least, it says it does. These four chapters, on interrupts, BIOS and drivers, Plug and Play, and memory, are confused, and even contradictory. While there are some nice explanations (such as that for shadowed BIOS), overall the material is hard to fit into a logical pattern. (A correct, one, at least.) Part three finally looks at the hardware level where perhaps the book should have started. On the other hand, while the pages on transistors are quite clear, the chapter on memory loses the advantage by turning everything into plumbing. Chapter nine, on logic circuits, works fine until it misses a step just before producing an adding circuit, and then jumps to a more complicated device, probably losing most readers. The chapters on processors have almost no link to the previous material. Pat four, on data storage, has both good and bad parts. The pure mechanics of magnetic, zip, magneto-optical, and floptical (oddly, CD- ROM is missing) are covered well. Details are very poor. FAT32 is in no way virtual. Win9x can store long filenames on FAT16 drives (albeit in a somewhat kludgy manner). A mirrored drive array provides just what the name implies--a kind of backup on disk, rather than any kind of interleaving. Yes, compressed drives avoid underutilized clusters, but they also use the same kind of compression that files do. (Good explanation on file compression, though.) Defragmentation is described well, but illustrated very poorly. Part five looks at a variety of input, output, and related devices and technologies; bus, port, keyboard, display, pointing device, game controller, modem, PCMCIA (Personal Computer Memory Card Interface Association) card, scanner, optical character recognition, and even GPS (Global Positioning System); so it doesn't do too bad with the brief space allowed. (Again, when the book gets down to details it makes mistakes, such as a confusion with the EIA-232 data pin assignments.) We finally get to CD-ROMs (and DVDs) in part six, making a rather odd introduction to multimedia. The Internet section, in part seven, provides a good description of ethernet and token ring, an odd diversion to star topology, a page that explains the OSI (Open Systems Interconnection) model without naming it and the packet concept very badly, reasonable stuff on email and streaming media, and a non-explanation of the Web. Part eight does a consistently good job on all aspects of printing. While I was initially skeptical of this series, previous titles had rather surprised me with their quality. It is disappointing, therefore, to find that the fundamentals are treated so badly in this volume. There is certainly enough to make this introduction to the technology worth considering, as long as you don't consider it an authoritative source. copyright Robert M. Slade, 1998

Add my review for How Computers Work (How It Works Series)

How Computers Work is the premier four-color guide to PCs. Using hundreds of pages of detailed, color drawings, How Computers Work, not only tells, but shows readers everything from how a signal travels through a circuit to why your game c -With more than 600,000 copies sold, How Computers Work is the classic graphic reference with four color explanations of how computers really work -Features the best graphics, drawings and details of all past editions for readers of all levels in one complete visual package -Features an all new, updated CD-ROM with animated footage of the inside of your PC. See in full motion how the inside of your computer really works