Book details of 'Even Grues Get Full: User Friendly the Comic Strip' 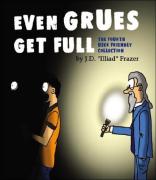 The Virtual Bookcase Reviews of 'Even Grues Get Full: User Friendly the Comic Strip':

Add my review for Even Grues Get Full: User Friendly the Comic Strip

Even Grues Get Full is the fourth collection of the hit geek comic strip User Friendly by J.D. "Illiad" Frazer. Written with fresh, dry humor and an amusing vividness that brings the cast of characters to life, the comic strip is loved and read by millions around the world, from professional technologists to eight-year old wunderkinds, from 83-year old grandmothers who miss their Commodore 64s to patient spouses of born programmers. The comic strip is packed with references to geek interests, from obscure movies to old computer games, yet non-geeks are able to enjoy the storylines and character quirks, from Erwin’s acerbic humor to Miranda’s constant angst; from the Smiling Man’s Machiavellian machinations to A.J.’s dysfunctional naivete. At the centre of this lies Dust Puppy, the strip’s gentle-hearted mascot and the character who has endeared himself to readers everywhere. In this book, join the antics of the characters once again as Stef contends with an enormous Tequila worm, Mike is tormented by Mr. Cola, and the techs move shop into an abandoned missile silo! Also included in this collection are the 9/11 tribute cartoons that were widely praised for their clear and simple pathos. Called "Dilbert for Geeks" by Wired magazine and considered to be one of the few consistently intelligent and socially aware cartoons on the ‘Net, User Friendly remains one of the most popular destinations for geeks and non-geeks alike. This book is a sure hit with anyone who works with computers or for anyone who lives with someone who works with computers!