Stopping with this site

I am stopping with this site. If you want to take over the site with domain name get in touch, e-mail address below. 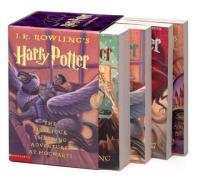 Reviewer amazon.com wrote:
Young wizard-in-training Harry Potter has had his hands full during his first four years at Hogwarts School of Witchcraft and Wizardry. As if studying spells and pleasing professors isn't enough, Harry has heard evil voices in the walls, rescued petrified students, fended off convicts escaped from wizards' prison, and played elaborate and grueling games of Quidditch. Between school sessions, he summers with the horrendous Dursleys, who seem to want nothing more than to crush our hero's spirit. Only time will tell how Harry will manage the certain dangers and escapades in store for him over the next few years. The first four titles of J.K. Rowling's phenomenally popular series are now available--in paperback--in a handy boxed set, perfect for the legions of children whose big brothers and sisters have made off with their copies. These adventures are surely on the road to becoming classics; don't wait to collect them! The set includes Harry Potter and the Sorcerer's Stone, Harry Potter and the Chamber of Secrets, Harry Potter and the Prisoner of Azkaban, and Harry Potter and the Goblet of Fire. (Ages 9 and older)