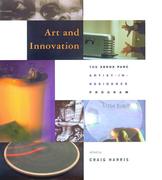 Back to shelf Computer history/fun

The Virtual Bookcase Reviews of 'Art and Innovation: The Xerox PARC Artist-In-Residence Program':

Reviewer amazon.com wrote:
Art and Innovation contributor Craig Harris writes that "[b]oth scientists and artists are converging ... in such issues as artificial life, teleprescences, and multimedia and immersive environments." But this connection is often overlooked, and as niche computer technologies become more standard, the groups may be becoming more entrenched and separate. Xerox PARC, now recognized as the hotbed of computer technology development in the latter half of the 20th century (and discussed in books such as Dealers of Lightning), took a new turn in the 1990s. Because of its interest in the "Office of the Future," Xerox paired Bay Area artists with its in-house team of computer scientists (as well as anthropologists, philosophers, linguists, interface designers, mathematicians, and cryptographers) and closely documented their discoveries. At the center of the PAIR Program's mission lies the future of digital media and the thesis that artists should be fundamentally involved with the development of these tools rather than just be consumers of them. Two more diverse and entrenched disciplines could hardly be found, and the surprising results are painstakingly detailed here. Precursors to the 1990s incarnation of the artist-researcher pairing brought about technical innovations such as the first bitmapped graphics editor, a result of the combined efforts of a mathematician and a sculptor. The roughly half-dozen experiments conducted within the PAIR Project are discussed in detail in this book, including a chapter about work on LambdaMOO, the social virtual-reality site that seeks to transcend the Web's use as primarily an information provider. Another particularly strong section of the book, titled "Endless Beginnings," owes much to Jenny Holzer, with multiple lines of thought on one hypertext-based project wrapping through the pages. While this book is limited by the need to present every speck of information (much like a conference paper), the ideas are substantive and worthy of consideration. Computer professionals working on the Web and in software development can read this notebook of ideas to facilitate their own expansive thinking beyond just the merits of clean code.

Add my review for Art and Innovation: The Xerox PARC Artist-In-Residence Program

The idea behind Xerox's interdisciplinary Palo Alto Research Center (PARC) is simple: if you put creative people in a hothouse setting, innovation will naturally emerge. PARC's Artist-in-Residence Program (PAIR) brings artists who use new media to PARC and pairs them with researchers who often use the same media, though in different contexts. This is radically different from most corporate support of the arts, where there is little intersection between the disciplines. The result is both interesting art and new scientific innovations. Art and Innovation explores the unique process that grew from this pairing of new media artists and scientists working at the frontier of developing technologies. In addition to discussing specific works created during several long-term residencies, the artists and researchers reveal the similarities and differences in their approaches and perspectives as they engage each other in a search for new methods for communication and creativity. Contributors: Marshall Bern, David Biegelsen, Michael Black, Jeanette Blomberg, John Seely Brown, Margaret Crane, Paul De Marinis, Jeanne C. Finley, Rich Gold, Craig Harris, Steve Harrison, David Levy, Constance Lewallen, Dale MacDonald, Judy Malloy, Cathy Marshall, Scott Minneman, John Muse, Susan Newman, Joel Slayton, Lucy Suchman, Randy Trigg, Stephen Wilson, Jon Winet, Pamela Z.