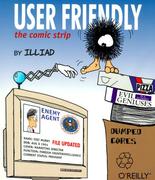 Reviewer amazon.com wrote:
Yes, it's a cliché, but it's true enough to be worth repeating: User Friendly is to the open-source world what Dilbert is to swarming hives of Windows cubicles. Set in an ISP company that keeps getting bought and sold, the constant remains a team of cynical, hilarious techies. M.B.A.s and marketers drift in and out, as do CEOs, often making statements like, "I can't surf the Web. I think the Internet is broken." For anyone who's dealt with similar situations, User Friendly is the ultimate in-joke. To be fair, the comic is pretty basic in layout and execution. No one will confuse this book with a graphic novel, since the visuals basically exist only to further the punch line. (Think of a stripped-down Bloom County and you're getting close.) Lots of the jokes involve goofy, clichéd rants about the beauty of Quake, Linux, and Star Wars--the holy trinity for a white, wired, 18-26 year-old male audience. But when the author, Illiad, nails the bloated bureaucracy that exists in the tech working world, it's a laugh-out-loud payoff. In one comic, a new "suit" walks into the tech den and asks, What's "one thing that makes your job difficult, and we'll see about eliminating that." The chorus erupts: "Meetings." The new boss replies: "Very good. Now let's spend a few hours discussing why meetings make you unproductive." A comic that tilts at windmills and Windows, it's clear why User Friendly has developed such a strong online cult following.

Reviewer Rob Slade wrote:
In the beginning was "Bloom County." I don't know about absolute beginnings, or first appearances, but "Bloom County" had a computer as a character, and it was, at the very least, thoughtful and insightful. Now, sadly, we have it no more. More recently we've had a nine year old hacker in "Foxtrot," but that is, well, slightly less thoughtful. Then we had Rich Tennant's computer series. They were pretty good, although after a while you started to notice that the captions tended to change on recycled illustrations. Then, of course, we had "Dilbert." "Dilbert" is lots of fun, but Adams is, after all, an MBA, and not a real engineer. He knows the milieu, but not the tech. It started slow. At first I could only get it through one lone computer sales rag. Then it became the only reason to buy Canada's "National Post" newspaper. Now we have an anthology from O'Reilly. Now we have Erwin the AI. And Dust Puppy (the, er, Dust Puppy). And the whole gang at Columbia Internet. And we have a cartoonist who really does know the computer from the inside. This is the real stuff. These are the in-jokes. Even the cover of this book lampoons not only computer workstations, surrounded by stacks of printout (boxed and unboxed), pizza cartons, and computer books, but the very publisher that printed the book, with its ubiquitous Nutshell series. We have the technical support staffer, sent to re-education because he has been contaminated by Microsoft. (In the "P. Norton Clinic.") We have cola by intravenous. (And junk food by the ton.) Fear of Macs. (Fear of females.) Eric Raymond. Richard Stallman. Toxic consultants. Clueless marketeers. OK, the artwork isn't great. Pretty stiff, for the most part. In fact, I have a vague suspicion that a bunch of templates have been stored and are dropped into scenes in a paint program. (I'm sure all the geeks out there would agree that this is a very efficient way to do things.) There is a rather heavy dependence upon TV. And you don't get a zinger every day. But when it's on, it's dead on. Get it, geeks. This is our cartoon. copyright Robert M. Slade, 1999

Add my review for User Friendly